Bernard Shaw scholars tend to be a generous lot. When I first went to the Comparative Drama Conference, folks from the International Shaw Society made me feel quite at home, and they have continued to be welcoming as I've met up with them at subsequent conferences.
When the Shaw scholar Chuck Berst passed away in 2019, it was a great loss. His wife Roelina, however, has tried to pass on his large collection of books about Shaw, and generously offered to send me the Constable & Co. collection of the great dramatist's works. One thousand and twenty-five copies of the 32-volume set were printed in 1931, and they are a treasure.
In the past, I have always checked out individual volumes of the Constable & Co. set from the library when I needed them. Unfortunately, libraries have been declared "non-essential" for more than a year now, so I was excited to receive the books. Even better, Roelina left in place the bookmarks where Chuck noted passages of particular interest. I've been going through them, trying to glean what I could from his insights.
One volume of Shaw's writing, Pen Portraits and Reviews, had quite a few passages flagged. The first one was a book review called "The Old Revolutionist and the New Revolution" which Shaw published in The Nation in 1921. Though actually about a book by H.M. Hyndman, the article is more interesting for what it says about the novelist H.G. Wells, a long-time associate of Shaw who had joined him in championing Socialism. 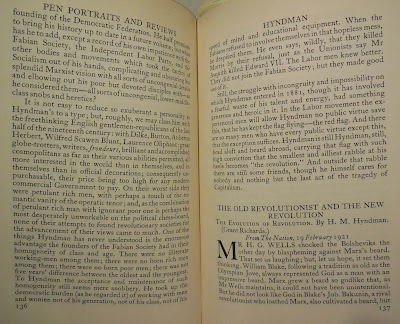 Another book mark, labelled "Terry" in an underlined fashion, marks an interesting comment on the actress Ellen Terry, who "has always been adored by painters." That is certainly true, and John Singer Sargent's 1889 portrait of her as Lady Macbeth has frequently been reproduced in prints and postcards (of few of which I might own). Shaw admits that he wanted Terry to perform his own plays and implies that he wrote Captain Brassbound's Conversion for her. Chuck marked in the margins where Shaw acknowledged that the description of the heroine of The Man of Destiny was "simply a description of Ellen Terry." 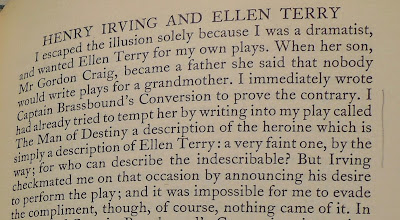 Shaw's contribution to a memoir on the journalist H.W. Massingham was also marked, but I was more interested in a flagged article called "Shaming the Devil about Shelley." The first article I published on Shaw had to do with the influence Percy Shelley's play The Cenci had on Shaw's early work. Shelley had anticipated Shaw's vision of the "life force" he worshipped, or at least Shaw thought so when he wrote "there never was a man with so abiding and full a consciousness of the omnipresence of a living force, manifesting itself here in the germination and growth of a tree, there in the organization of a poet's brain." 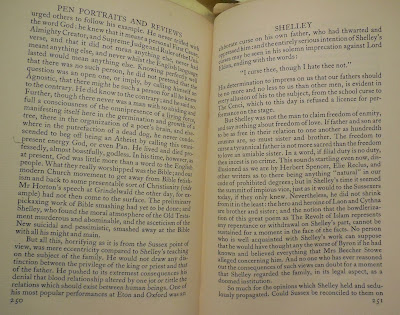 The final bookmark in the volume is for a published letter Shaw wrote about fellow Irish dramatist Oscar Wilde. Each slip of paper was illuminating for me, and I look forward to exploring some of the other marked passages in the set.
Posted by James Armstrong, Playwright at 8:45 PM