The kabuki play The Precious Incense and Autumn Flowers of Sendai was originally written by Nagawa Kamesuke, but was adapted as a puppet play, and then adapted back into kabuki. This is why it uses the convention of takemoto, a chanter and shamisen player fully visible onstage and narrating the action, as occurs in the traditional Japanese puppet performance of joruri.
Today, the play is rarely performed in its entirety, but two scenes from its second act are frequently done on their own, and have become a standard of the kabuki repertoire. This is largely due to the character of Masaoka, which is considered one of the most difficult onnagata (female character) roles in kabuki. A nursemaid in charge of a young lord, Tsuruchiyo, Masaoka is forced to watch while her son Senmatsu is stabbed right in front of her by the villain's sister, Yashio. The takemoto describes the action, chanting:
As she twists the knife,
the sound of Senmatsu's screams
is enough to make Masaoka feel the sadness
even in her own liver,
but she endures the pain
for the sake of the young lord
and doesn't even shed a tear.
This moment has been frequently recorded in visual art. Here's a print of Yashio committing the foul murder: 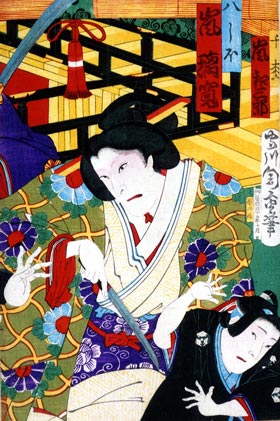 The horrifying violence is aestheticized onstage, a technique known as zankoku no bi. The audience might be revolted, but the beauty of Masaoka's stoic endurance is at the same time applauded and appreciated. Her virtue and patience are rewarded when she receives a scroll with the names of all the conspirators plotting to overthrow and murder Tsuruchiyo.
Nothing is ever easy in kabuki, and a rat ends up stealing the scroll and running away with it in its mouth. The rat later transforms into the villain sorcerer Danjo, who appears with the scroll in his mouth. You can see a print of him here: 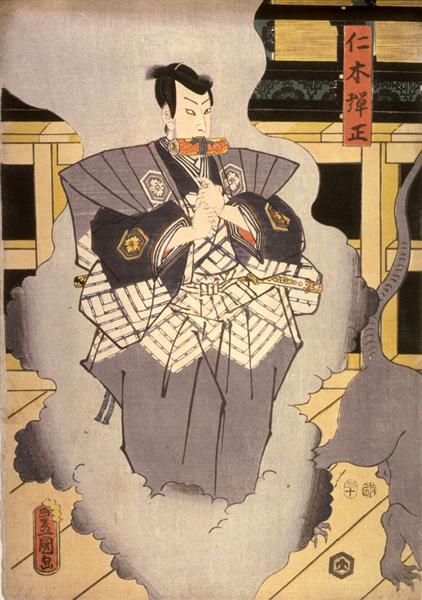 Eventually, good triumphs over evil in the play, but not before there's been plenty of excitement.
Posted by James Armstrong, Playwright at 2:06 PM