The earliest known depiction of Izumo no Okuni, the founder of the theatrical form of kabuki, is on a screen currently owned by the Kyoto National Museum in Japan.
This six-paneled screen, which dates from the 17th century, utilizes gold-leafed paper to create a grand and impressive image.  The screen is nearly three feet high and close to nine feet long. You can see a reduced image of it here:

In the third panel from the left, Okuni herself appears onstage, sporting a sword over her shoulder. She appears to be acting in a scene set in a teahouse (which could also double as a brothel in Okuni's day). Dressed in men's clothes, the founder of kabuki would perform male roles to the delight (and frequently scandal) of the audience. Here's how she appears on the screen: 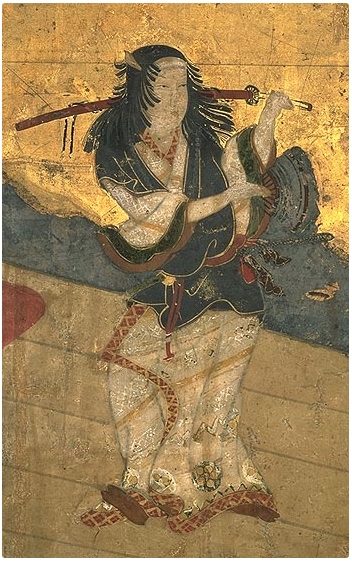 We have a few first-person accounts of Okuni's performance. Here's one from the early 17th century, as translated by Akemi Horie Webber:
Lately there is a thing called kabuki dance. A shamaness from Izumi province, named O-kuni, came to Kyoto and initiated it. For example, she imitated a man of unusual appearance, carrying a sword and wearing distinctly exotic costume. This man mimicked the gestures of flirtation with a woman of the teahouses. There was no one in the whole of Kyoto, high and low, why did not rave about her performance. She often went up to Fushimi castle and danced there. Soon, there sprouted numerous kabuki troupes that imitated this, and many of them traveled the provinces.
Another written account describes Okuni's character purchasing the services of a courtesan in the teahouse, but  the courtesan acts in a comical manner and is dressed with a colorful scarf over her head. Such a figure, crouching down and holding a fan in front of her face, appears on the screen not far from Okuni.

Part of the reason these performances became popular was that they reflected the uproar society in general was experiencing in Japan during the early 17th century. The country had just been through a period of civil war, which came to a head in 1600 with the Battle of Sekigahara. After that battle, the military leader Tokugawa Ieyasu was able to establish his power, and in 1603, he was named shogun, the de facto ruler of Japan.
The thing is, a lot of people were unhappy with Tokugawa's shogunate. It had risen to power only after fierce conflict, and many samurai remained resentful of the new government. Certain clans had lost power and status, and though they couldn't openly defy the new regime, they mocked the conventions of society as a way to express their displeasure. Okuni's characters reflected the formerly powerful warriors who were now left adrift in Japan.
Audiences, it seems, related to the new style of performance, which unlike Noh, did not use masks and tended to be more secular than religious. Like Noh, however, it relied on music and dance to help tell the story. The screen at the Kyoto National Museum shows musicians playing flutes and drums, though not the shamisen, a stringed instrument that later became popular in kabuki.

The audience members in the screen sit on mats on the ground, watching the performers on the elevated stage. This stage resembles a classic Noh stage more than it does a modern kabuki stage with its hanamichi bridge extending out over the audience. We can see that the audience members are paying attention to the performance, but they are also socializing with one another. 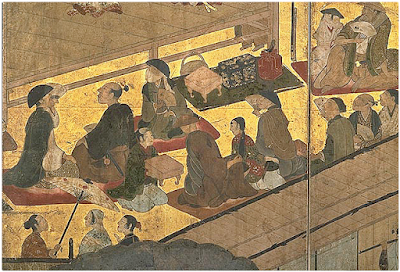 A barrier surrounds the audience, and outside that barrier, we can see what appears to be a refreshment stand, providing people with snacks. 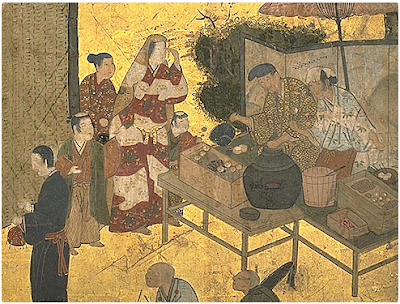 Though we cannot know for sure what it was like to watch Okuni pioneering her new performance style, the screen at least gives us some fascinating hints.
Posted by James Armstrong, Playwright at 7:48 PM