As we move into the second month of theatre (and nearly every other activity) being banned in New York City, the United States, and much of the world, I was grateful to have the opportunity to watch the National Theatre's production of Jane Eyre, which started streaming over the Internet today.

The U.K.'s National Theatre has been providing a different play to stream each week during the quarantine. Last week, it was One Man, Two Guvnors, Richard Bean's hilarious take on the Goldoni comedy The Servant of Two Masters. I saw that production when it was on Broadway, so I was more interested in this week's offering: the company-devised adaptation of Jane Eyre the National Theatre co-produced with the Bristol Old Vic.

Charlotte Brontë's novel contains more than enough drama for a thrilling play, and the cast did an excellent job, led by Madeleine Worrall as Jane and Felix Hayes as Rochester. With adaptations of this sort, however, much of the fun comes from seeing supporting members of the cast take on multiple roles. It was wonderful watching Craig Edwards play both Mr. Brocklehurst and the dog Pilot, and to see Laura Elphinstone transform from Jane's friend Helen, to her pupil Adele, to her cold suitor St. John.

You can still catch the production until April 16, when the NT's streaming play of the week will switch to an adaptation of another Victorian novel, Robert Louis Stevenson's Treasure Island. The following week, they'll be streaming Shakespeare's Twelfth Night, just in time for the Bard's birthday. The theatre has also said they will be announcing more streaming productions later.

Sadly, the physical National Theatre building in London remains closed at least through the end of June. The same is true of many theatres around the world, including the Shaw Festival in Ontario, Canada. I'm still hoping to get up to Canada to see their production of The Devil's Disciple in July, but with death tolls still climbing, I'm not holding my breath. 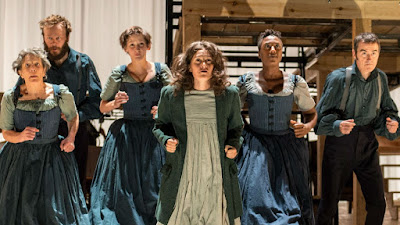