One of the most enduring kabuki plays ever written is Ichikawa Danjuro's Shibaraku. First performed in 1697, the play remains a favorite today as a "face-showing" production at the start of the season, introducing the audience to the new company of actors for the year.

No doubt the play's large cast makes it attractive for such an event. Also, its over-the-top performance of a heroic, bravura style known as aragoto makes it impressive to watch. Plus it has a remarkable villain, Takehira, who is an evil lord that everyone loves to hate.

The play begins with the footmen of Takehira speaking in a flurry. The evil lord himself then appears on a raised platform. With him is Shinsai, a priest who has long, pigtail-like whiskers that make him look like a catfish. They celebrate the fact that Takehira has subjugated the Eastern provinces and will soon hold absolute power.

Not content with political and military domination, Takehira lusts after the beautiful Katsura, who is already engaged to Yoshitsuna, the son of an important governor. Yoshitsuna tries to report Takehira's foul deeds to the Emperor, but the evil lord stops him from leaving. Just as everything looks hopeless, we hear a cry of "Shibaraku" which is loosely translated at "just a minute" or "wait a moment."

That cry comes from Kagemasa, a hero of superhuman strength. The villains are struck with terror, as they hear the cry again and again. The actor playing Kagemasa then enters wearing an oversized costume that includes clogs to make him taller. He also wears a large wig that adds to his height even more. He has two enormous swords and his face is painted a distinctive red and white.

Takehira sends Shinsai to stop the hero, but the cowardly priest is no match for him. Shinsai tries to get a woman to confront Kagemasa instead. Four samurai reluctantly come forward to fight, but then turn and run. Kagemasa restores Yoshitsuna's inheritance and allows him to marry Katsura. When Takehira's henchmen try to stop him, he cuts off their heads. The play ends with a grand, triumphal exit. 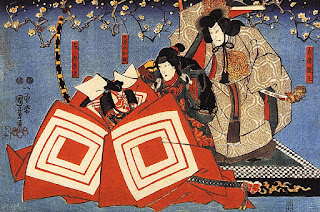