Last night I saw Sam Kahn's new play Chatter at The Tank. The Tank now resides in the space that formerly housed the Abingdon Theatre Company, an institution whose fall has been a major blow to the New York theatre scene.

Of course, a shell of a company still calls itself the Abingdon and occasionally performs around the city in other spaces, but it's only a shadow of what it used to be. The Tank, with its grey walls, is not a theatre company per se, but a space in which artists can come together and present their own work. The heart that once beat in that space is gone, which is why it's fitting that Chatter deals so much with the struggle to find something authentic in our hyper-mediated world.

Once upon a time, off-off-Broadway was filled with tiny theatre companies that inhabited holes in the walls. These were dank caverns you entered through metal doors covered with fliers before climbing several flights of stairs until you found the obscure, un-air-conditioned black box where you sat on uncomfortable seats and watched shows performed on shoe-string budgets that still managed to somehow change your life. The doors to The Tank are polished glass now, without a cheap flier to be seen, and visitors are politely asked not to take the stairs, but rather ride in a comfy elevator. With all this convenience of modern-day New York, have we lost something? 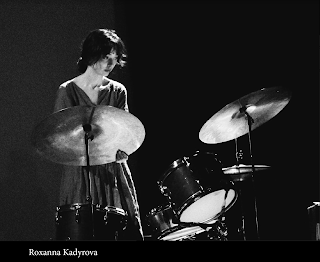 Chatter seems to say, yes, we have! The play agonizes over an authenticity that its characters are never able to find. In the first scene, the main character, Claire (played by Roxanna Kadyrova), stares down a shaft in an apartment building she's thinking of moving into. She can see people passing by, and a smoker's corner and a tattoo parlor. This is real-life New York City. The view is magical to her, but while she spends the rest of the play chasing down that ideal of authentic New York life, she's never able to quite reach it. Her life remains mediated though cell phones and dating apps and the opinions of people who don't genuinely care about her.

If there is a chance for human connection, it's with her roommate, Mary Ellen, played wonderfully by Stacey Weckstein. Mary Ellen is fascinated with Claire because she's beautiful and exotic. (She's actually just from Quebec, but to Mary Ellen that might as well be Narnia.) Unfortunately, Mary Ellen can't get out from under the shadow of the more confident and successful Deborah (played by Whitney Harris) who has apparently been bullying her since middle school. Deborah urges Claire to join the dating scene rather than just sitting at home binge-watching T.V. with Mary Ellen.

As the years fly by, Claire eventually relents and begins a relationship with the wealthy and dashing Blake (played by Derek Stratton), who immediately starts displaying red flags. He brags about the long hours he works and the money he makes, and he makes sexist blanket statements about women. Chatter gets the audience to revisit Blake's character, though, by repeating sections of the play, showing Blake first as a stereotypical jerk, but then as a sensitive, self-aware human being, saying the same lines, but with an emotional authenticity that connects with Claire. Is he really authentic, though, or just a sham, pretending to be sensitive when he actually is that jerk-ball stereotype?

The play never really lets us know. It gives us various alternatives, but continually makes us aware of the fact that we're watching a play. In the second half, the play's director (Alexandra Dashevskaya) and the playwright both appear in video footage, commenting on the action as the actors continue their scenes. In the world of Chatter it isn't just the characters who are searching for an authentic New York experience. We see the director and playwright similarly wandering through New York streets, occasionally with iconic landmarks in the background, telling us they don't know what to do or how to tell the story.

While Chatter could have turned into a self-indulgent piece of millennial navel-gazing, the second half of the play does more than just complain about how hard it is to be young in the 2010s. The play projects forward into the future lives of the characters in the coming decade, as well as the future life of New York City. Claire is now married to David (played by Michael Tyler), whom she met on a meditation retreat, and the two of them attend a dinner party at the home of Blake and Deborah, who are now married. The couple have gutted the old apartment Claire once shared with Mary Ellen, and now have lots of space, but nothing to put inside it.

Even when discussing the loss of authenticity, however, the characters can only talk about it in terms of fictional versions of New York, rather than the city as it actually was. Mary Ellen views her old apartment through the lens of Sex and the City rather than her actual memories of it. When she fanaticizes about an ideal life, it isn't actually living life, but watching it on Netflix. The characters in the play watch each other, watch themselves, and watch the city deteriorate into an empty box of nothing, but they seem unable to experience life directly for themselves.

Chatter diagnoses the ailments of our current society, but it never figures out how we can break from our present path and find a way back to authentic human experience. Maybe we need to find that special view of the shaft outside our apartments. Or maybe we just need to be allowed to skip the elevator and take the stairs for a change.

Unfortunately, Chatter is only playing until July 8th, so if you want to see it, get your tickets soon! 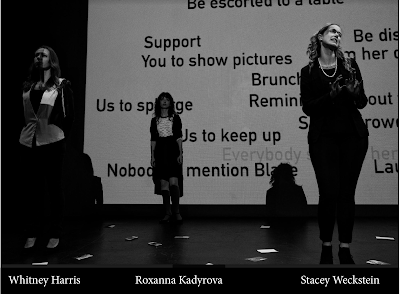 Posted by James Armstrong, Playwright at 7:53 AM