The Battle of Hernani

On this date in 1830, theatre patrons at the Comedie-Francaise in Paris fought the famed Battle of Hernani.

While there were no swords, muskets, or canons at this battle, the theatre did see some fisticuffs, and lots of shouting. 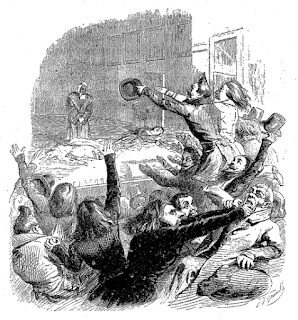 Here's what happened: Victor Hugo had created quite a stir with the preface to his play Cromwell. The preface argued for a new type of modern literature, which he explicitly labeled as Romantic. This literature found its ideal form in the drama, Hugo said, and it is characterized by a grotesque combination of the sublime with the ugly and demonic.

Wait, so the grotesque is a good thing? According to Hugo, the answer is yes. Cromwell was too large in scope to be practically performed even by a theatre with the resources of the Comedie-Francaise, though. (The play is more than 400 pages long, and at one point calls for the entire British Parliament to come on stage.) To put his theories to the test, Hugo needed to write another play.

The author had difficulty getting his next play, Marion de Lorme, performed. (The fact that it's about a famous French courtesan who intrigued with powerful men probably didn't help.) Hugo then had a try with a new play, Hernani, about a Spanish bandit and revolutionary in love with the same woman as the king. Censors decided the play was too ridiculous to ban, and it was approved for performance. Since it had already been published, everyone knew the play's plot and its most dramatic lines even before it debuted.

On February 25th, supporters and critics of the play crammed into the Comedie-Francaise, all with their own pre-formed opinions of the piece. Supporters (some of whom were paid by Hugo, in spite of claims to the contrary) agreed to cheer at key moments, while detractors were determined to boo the play regardless of how well or poorly the actors performed. In the end, few people were able to hear the actors anyway, such was the drama in the audience. Police made a few arrests, but the play went on, and after that chaotic first night, it continued to run for a total of 39 performances, making it a commercial success in spite of dividing the critics.

Hernani was a theatrical revolution, and it prefigured a political revolution only a few months later. In July, many of the theatre fans who participated in the Battle of Hernani took part in a real battle to oust the king, Charles X, and replace him with the "Citizen King" Louis-Philippe, who promised to rule as a constitutional monarch. Romanticism had triumphed on the stage, and now democracy was ascendant in the halls of government.

Today, Hugo is more famous for his novels than for his plays, but it's fitting that we remember his dramatic achievements, as well.
Posted by James Armstrong, Playwright at 9:51 AM