The Signature Theatre Company isn't shy about the title of Suzan-Lori Parks' drama inspired by The Scarlet Letter that's currently playing off Broadway. 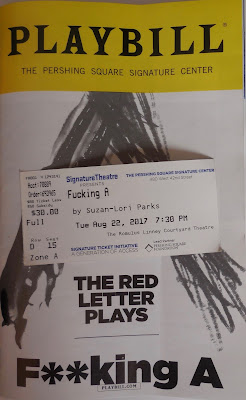 "The house for Fucking A is now open," they proudly announce over the loudspeaker. "Please take your seats for Fucking A, playing in the Linney Theatre."

Playbill is perhaps a little more squeamish. The play is billed as "F**king A" both on the cover and throughout the program. Not on the ticket, just on the program.

Ah, well. I guess Playbill has to worry about advertisers. Still, it seems odd, given that theatres are so upfront about the play's name. I remember being in the lobby of The Public Theatre in 2003 when Fucking A had its first off-Broadway run. I do not recall any asterisks obscuring letters on the signs. (Maybe I'm wrong. It was a while ago.)

As for the play itself, Parks has been clear about the fact that the play is a "riff" on Nathaniel Hawthorne's 1850 novel, rather than an adaptation of The Scarlet Letter per se. The central character is still named Hester, but in the dystopian world of Fucking A the scarlet letter is not an "A" sewn onto the clothes of an adulteress. Instead, it is an "A" branded onto the chest of an abortionist.

The play takes place "in a small town in a small country in the middle of nowhere." In that country--perhaps a bit like in our own--abortion is not illegal, but it is stigmatized. Abortionists must be literally branded and display their branding at all times. Hester wears a dress with a portion cut out so that her "A" can always be visible. Customers come to her legally, but they try to conceal their identities. Everyone in the play agrees that what Hester does is wrong, but they also admit that it's probably necessary.

Hester is saving up to buy her son's freedom. In her country--perhaps a bit like in our own--children can get caught up in the criminal justice system and be imprisoned for years. Hester's son has grown into manhood while imprisoned, and while she keeps making payments to the "Freedom Fund" for his eventual release, his sentence is constantly increased due to new infractions he allegedly commits behind bars. At one point, a neighborhood butcher tells Hester all of the crimes his own daughter has committed, and the list includes barbaric atrocities, minor infractions, and ridiculous actions we would never consider to be crimes.

Here's where Fucking A really does seem to be inspired by Hawthorne. The Scarlet Letter goes to great lengths to explain that it takes place in a society not like the present day, but that what happened there remains as a legacy to everyone today. The world of Fucking A is not that of Hawthorne's Puritan ancestors, but it deals with the same issues of shame, hypocrisy, and love that fascinated Hawthorne.

And while the world is not (yet) our own, it certainly resonates with today and the political and moral debates we are still having.

Fucking A is playing until October 1st. For more information, check out the website of the Signature Theatre Company.
Posted by James Armstrong, Playwright at 7:17 AM