A Lesson from the Orchard

This week I was teaching a script analysis class, and we were picking apart Anton Chekov's The Cherry Orchard. It was interesting on Monday to discuss the objectives of different characters in acts one and two.

And then Tuesday happened. 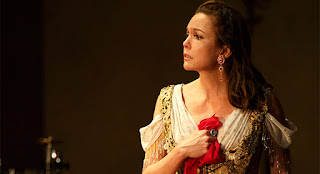 They all stared at me. Really? This was what we were going to talk about today?

"What is The Cherry Orchard about?" I asked them.

There were blank stares.

"Okay," I said. "I'll make it easy on you. What happens in Act III? What is everyone doing in Act III?"

"That's right," I said. "They're having a big ball with a band and lots of dancing. Meanwhile, what's happening?"

"The cherry orchard is being sold," another student said.

"And did they expect it to be sold?"

"No," said a student. "They thought they could never lose it."

Roundabout Theatre Company's production of The Cherry Orchard is currently playing until December 4th, and if you haven't seen it yet, you should. The play reminds us that nothing is inevitable. We can try to go along in life as if the world will always be the way it always was. That's what the family in The Cherry Orchard does. But they lose the orchard. They lose everything.

The play premiered at the Moscow Art Theatre in 1904. Ten years later, Europe was enveloped in a World War. Three years after that, Russia fell to the Bolsheviks. Were all those delightful characters in Chekov's play real people, they would probably all have been dead within a few decades after the loss of their orchard.

And so we, too, America, have gone on thinking that nothing could ever change. But it can. And while we danced at the ball, the land might have been sold out from beneath our very feet. And what is to come might be even worse.

I hate you, Chekov. I wish you weren't right.