I've been listening to the latest CD by musical theatre composer David Mallamud. I'm a fan of his work, including the delightful children's musical Flight School and a piece about the infamous Dr. Crippen which has long been in development.

Mallamud's new album, The Wild & Whimsical Worlds of David Mallamud showcases the composer doing what he does best, evoking another era and style while still retaining his own musical voice. The first cycle of songs on the CD, appropriately named "Parlor Songs," is inspired by American popular music from the latter half of the 19th century. The stand-out track here is "My Only Love," sung by the magnificent Sierra Boggess. 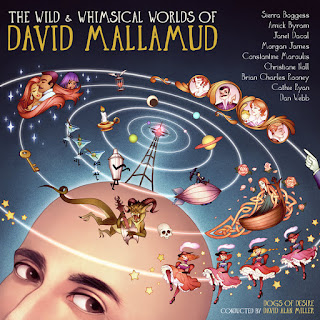 The section of the album I keep going back to, though, is "Immram." The Irish-inspired musical suite takes its name from the hero's journey into an Otherworld in Celtic folklore. Sections of the music, such as the vocals by Dan Webb, seem grounded in our world, while the etherial voices of Cathie Ryan and Morgan James carry us away to a land of dreams and imagination. There is no clear story in "Immram," but it certainly evokes a sense of movement and narrative, allowing the listener to construct his or her own story.

Other sections of the album might hit or miss depending upon your musical tastes, but what is amazing is that they were all composed by the same person. "El Dilema de Chucho" creates a score for an imaginary telenovela, and indulges shamelessly in a soap-operatic feel, while the following three tracks sound like the favorite pop songs of the characters on Mad Men.

The longest cycle of songs on the album, "Last Call at the Folies Bergere," evokes early 20th-century France (complete with some faux-French lyrics) while somehow remaining very American, and pure Mallamud. Even more fun is the last piece, "Lizardman," a heavy metal piece featuring Constantine Maroulis telling the story of a geeky bullied kid who turns himself into a lizard.

If you get a chance to check out the album (which is available both on Amazon and on iTunes), it is definitely worth a listen.
Posted by James Armstrong, Playwright at 8:47 AM