CAPITAL to premiere at Detroit Rep! 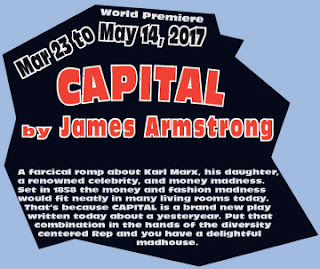 The Detroit Repertory Theatre has now formally announced their 60th season, and their third show in the line-up will be the world premiere of my new play Capital.

Capital will run from March 23rd to May 14th, 2017 at Detroit Rep, 13103 Woodrow Wilson Street, in Detroit, Michigan. You can get a subscription for the full season HERE, and find directions to Detroit Rep HERE.

The play takes place during the summer of 1858, when Karl Marx was working as a lowly journalist in London. In the play, Marx mistakenly gets hold of a scandalous letter by Charles Dickens. He determines it must be returned to its rightful owner. However, his teenage daughter Jenny (a materialist, but not of the philosophical kind) has other plans....

Capital deals with two iconic figures of the Victorian era, imagining how their paths might have crossed, and how decisions made long ago might still be affecting us today. As Detroit Rep has said in their promotional materials, the play is "a delightful madhouse" full of farcical comedy.

I hope you come out and see it!
Posted by James Armstrong, Playwright at 1:58 PM