Last night, I saw James Oritz's play The Woodsman at New World Stages. The show is a great example of how mime, puppetry, and music can tell a story with the actors scarcely having to say a word.

Anyone who has read L. Frank Baum's The Wonderful Wizard of Oz surely remembers the heartbreaking story of the Tin Woodsman. This woodsman, who was once human, lived with his father and mother in the forest until they both died. Expanding on the tale, The Woodsman shows us the courtship of the title character's parents, and the birth and childhood of their son. In the book, Baum has the Tin Man relate:

There was one of the Munchkin girls who was so beautiful that I soon grew to love her with all my heart. She, on her part, promised to marry me as soon as I could earn enough money to build a better house for her; so I set to work harder than ever. But the girl lived with an old woman who did not want her to marry anyone, for she was so lazy she wished the girl to remain with her and do the cooking and the housework. So the old woman went to the Wicked Witch of the East, and promised her two sheep and a cow if she would prevent the marriage.

Simplifying the story, The Woodsman has the old woman be the Wicked Witch herself. We see her flying around the stage (and even over the audience) in the form of a simple but effective puppet. Later, she emerges as a larger, more complicated puppet operated by two actors. The Witch, we are told, was so terrifying, that everyone was afraid of her. She used crows (in the form of eerie two-piece puppets) to spy on the people to such an extent that the inhabitants of the land stopped talking to avoid being overheard by the Witch's spies.

This leads to the wonderful conceit of the play, where characters act out their thoughts and desires and make emotional grunts rather than using words. For instance, when the Woodsman (played by Oritz himself) wants to show his Munchkin love the house he will build, he presents her with a model of the house rather than speaking. Aside from the spoken prologue, there are very few words in the play, making it a great offering for international audiences.

The play is far from silent, though. Composer Edward W. Hardy provides enchanting music, played with remarkable stamina by violinist Naomi Florin. The cast also sings a few songs (with lyrics by Jen Loring) and provides numerous sound effects, including the chopping of wood, the calls of crows, and sounds of even more ominous creatures in the forest.

As readers of Baum will remember, the Witch enchanted the Woodsman's axe so that it attacked him, chopping off one body part at a time, but a tinsmith made new mechanical parts after each one was lost. (The Woodsman actually features a whole team of steampunk tinsmiths.) The audience watches in fascination and horror as the Woodsman is slowly replaced, piece by piece, but puppet parts, which are ultimately bound together.

Oritz designed the puppets as well, along with the show's magnificent set, which features mason jars placed over old-fashioned incandescent bulbs. The bulbs light up periodically, creating the effect of flashing fireflies or the distant call of the Emerald City. The stage magic retains a turn-of-the-century aesthetic, which is fitting for the play's subject matter.

Broadway audiences can see another version of Oz before Dorothy on stage at the mammoth Gershwin Theatre, but this play is the anti-Wicked. Instead of the huge special effects of a Broadway extravaganza, it features smaller, low-key theatrical devices, yet it can be just as magical. 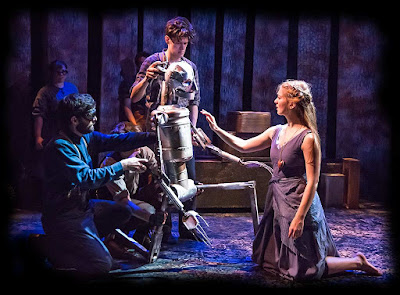 Posted by James Armstrong, Playwright at 9:54 AM