You've only got two more chances to see Faux-Real Theatre Company's production of The Bacchae at La Mama. The production is beautifully directed by Mark Greenfield and is well worth seeing. 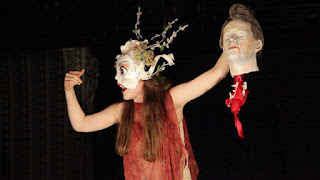 By all accounts, the Greek dramatist Euripides was an odd fellow. His plays seem by turns feminist, and by turns misogynist. That certainly comes through in The Bacchae, where a roving band of Maenads subverts male authority, running amok in the woods, tearing animals to pieces with their bare hands.

Even more problematic is the relationship Euripides had with the gods. Many people accused him of being overly skeptical, siding with Socrates and helping to corrupt the traditional values of Athens. His final tragic trilogy, however, consisting of The Bacchae, Iphigenia in Aulis, and the now lost Alcmaeon in Corinth, demonstrates a much more complex relationship with religion.

The god Dionysus (played in this production by the magnetic Andrew Bryce) is sympathetic in his love for his mother, Semele, a mortal beloved by Zeus, but who was destroyed be seeing her lover in his full glory. Semele's family didn't believe her, though, and doubted the existence of the new god Dionysus. In revenge, he drives Semele's sisters--Ino, Autone, and Agave--mad. They wander the hills with the other crazed revelers, dancing, drinking, and engaging in all sorts of excess.

As the play goes on, though, the god's revenge seems increasingly gratuitous. Agave's son Pentheus, the new ruler of Thebes, aims to crush the cult of this strange god. PJ Adzima, who portrays Pentheus in this production, plays him as an overconfident politician, winning little sympathy from the audience. As he converses with a stranger (actually Dionysus himself in human form), Pentheus begins to change, though. He comes to appreciate the importance of the irrational urges celebrated by the new god, only his change comes too late.

Being torn to pieces by your aunties can never be a fun experience, but this grisly action usually takes place off stage. Greenfield instead uses puppetry (designed by the talented Lynda White) to dismember Pentheus before our very eyes. When Agave (heartbreakingly portrayed by Fionna Robberson) realizes what she has done to her own son, the god's revenge becomes beyond excessive.

Even more unjust, Semele's father Cadmus (played with comic dexterity by Jy Murphy) has seen the error of his ways, and at the beginning of the play has gone out to join the revelers. Yet Dionysus transforms him into a snake, and drives his daughters out of Thebes.

Is the god good? Evil? Indifferent to humanity. In the end, Euripides seems to be saying that it does not matter. There are forces in the universe more powerful than mere mortals, and we all ignore them at our peril.

If you want to see The Bacchae, it is playing tonight at 7:30 and Sunday at 2:00. For more information, go here:

The Bacchae at LaMama 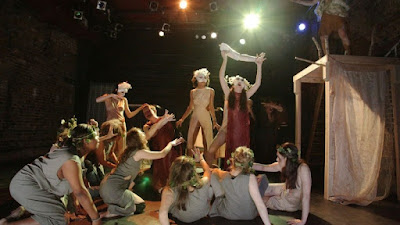 Posted by James Armstrong, Playwright at 8:41 AM