The most recent issue of Theatre Notebook contains an interesting article by Russell Burdekin about the stage illusion known as Pepper's ghost.

Descriptions of this trick go back to the 16th century, when scientist, playwright, and general Renaissance man Giambattista della Porta wrote about it in his book Natural Magic. The effect was not popularized, however, until the 19th century, when Henry Dircks used it for a "Phantasmagoria" performance showing ghosts on stage.

Dircks was never able to sell his illusion technology to mainstream theatres, but his colleague John Pepper improved upon the technique and successfully marketed it to producers. He exhibited the illusion in a performance of Charles Dickens's novella The Haunted Man, in which he read the text and a series of ghosts appeared on the stage. Audiences were hooked, and the effect became known as "Pepper's Ghost" (much to the chagrin of Dircks).

Here's how the effect works: 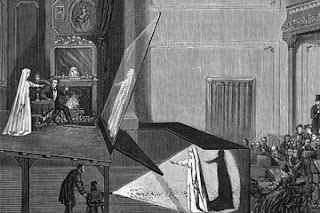 Beneath the stage and out of view of the audience, an actor stands before a very bright spotlight. Initially, this was an oxy-hydrogen limelight lamp, though later on gas or electric lights could be used. The chamber with the actor would be lined with black cloth, so only the actor could be seen. Sometimes, a tilted mirror could reflect the image of the actor upward, toward the stage.

Projecting at an angle out from the front of the stage would be a large pane of glass. This would be kept as clean as possible so as not to be noticed by the audience. A patent by Dircks and Pepper suggests that the glass could remain below the stage, and only be brought out when it was time for the illusion. Lights on the stage would also have to be angled to illuminate the stage only, and not reflect off of the glass. Fortunately, lights in the theatre were generally dimmed for the ghost scene, anyway.

When the spotlight came on, illuminating the actor beneath the stage, the image of the performer would be reflected by the pane of glass angled out over the audience. To the spectators, a ghostly figure appeared to materialize on the stage itself. The actors on stage, of course, could not see this ghost, but they would react on cue as if they did. The effect was thrilling.

Pepper first licensed the technique in 1863 for a production of Faith, Hope, and Charity at The Britannia Theatre in London. The show ran for a year. The illusion became particularly popular in productions of Faust and A Christmas Carol, as well as John Barnett's opera The Mountain Sylph, where the title character would sometimes wear phosphorescent paint to increase the effect.

Though Pepper's Ghost might not be used much anymore, the illusion excited Victorian audiences for many years. The effect is a reminder that the 19th-century stage could be technologically quite sophisticated at times.