Yesterday, I promised a blog post about Christopher Marlowe, the first truly great playwright of the Elizabethan stage. 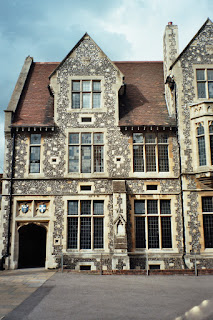 Marlowe was born in the town of Canterbury, and in spite of his humble origins, he was allowed to attend Canterbury's King's School as a boy, learning Latin and Greek. Marlowe did so well in his studies, he received a scholarship to attend Corpus Christi College of Cambridge University. While there, he might have written Dido, Queen of Carthage, a rather academic play mingling mortals and humans on stage, containing plenty of literary allusions but not much plot.

As a student, Marlowe seems to have gotten caught up in the cloak-and-dagger world of Queen Elizabeth's secret police, headed by Sir Francis Walsingham. He stopped attending classes, and Cambridge University was going to refuse him a degree until the Queen's own Privy Council intervened, assuring university officials Marlowe had done "good service" to the government during his absence.

Marlowe moved to London, where in 1587 he took the theatre world by storm with his play Tamburlaine the Great. The play features a seemingly unstoppable conqueror who--like Marlowe--came from humble origins and rose to great heights. Similar to Gorboduc and The Spanish Tragedy, Marlowe's play was written in blank verse, but the poetry had a raw power the London stage had never before seen. The actor Edward Alleyne performed the title role and rocketed to fame along with the playwright. Marlowe then provided his star actor with a sequel (Tamburlaine the Great, Part II), which proved just as popular as the original. Later poets would praise the dramatist's hard-driving iambic pentameter as "Marlowe's mighty line."

Alleyne also starred in Marlowe's The Jew of Malta, which likewise has powerful and frequently shocking poetry. Marlowe continued to develop as a playwright with Edward II, a history play with a tightly constructed plot and somewhat more subtle characters than those of his earlier works. He turned to recent events with The Massacre at Paris about the Saint Bartholomew's Day Massacre of 1572. 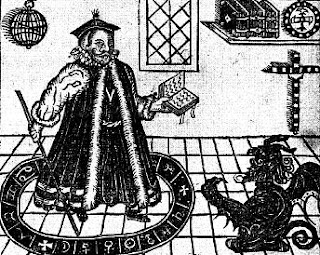 Marlowe's most enduring play, Doctor Faustus, dramatizes a German legend about a scholar who makes a deal with the devil. The play's blending of comedy and tragedy in a grand struggle for the soul of mankind hearkens back to medieval morality plays, but in the new Protestant environment, Doctor Faustus drew attacks from religious zealots opposed to the theatre. One, William Prynne, claimed real devils had appeared on stage during a performance of the play.

Though details remain murky, sometime in 1593 Marlowe fell out of favor with Walsingham and his secret police. Marlowe had once lodged with fellow dramatist Thomas Kyd, and under torture Kyd claimed that some blasphemous writings found in his possession actually belonged to Marlowe. A warrant was issued for his arrest, but when Marlowe tried to turn himself in to authorities, he was told to come back when the Privy Council was meeting. Days later, he died in a tavern brawl, allegedly in a dispute over the bill. A coroner's report found he was stabbed above his right eye, killing him instantly.

What really happened, we may never know. What is clear is that Marlowe left a legacy of great plays that continue to be performed today.
Posted by James Armstrong, Playwright at 9:01 AM