I've always had a special place in my heart for Ann Radcliffe, the author of the Gothic novel The Mysteries of Udolpho. She even appears in my own play The Mysteries of the Castle of the Monk of Falconara, which is anthologized in The Best American Short Plays: 2005-2006 published by Applause. 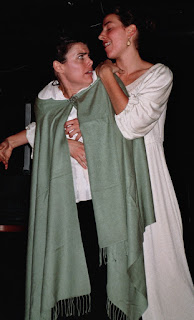 Though Radcliffe never wrote plays (that I know of) her stories quickly made it to the stage. The actor Henry Siddons adapted Radcliffe's early novel The Sicilian Romance, which debuted at Covent Garden in 1794. The play even heightened some of the more sensational effects of the novel. In the stage version, for instance, the villain keeps his wife chained to a stone wall in a secret cave.

That same year, James Boaden adapted Radcliffe's The Romance of the Forest as Fountainville Forest. Radcliffe always made sure to explain away supposedly supernatural events in her books. She provided rational explanations for all of her ghostly apparitions, even if those explanations came late in the story and didn't satisfy everyone. Boaden paid no such honor to rationalism, and made the ghost in the story real.

In 1797 Boaden dramatized Radcliffe's last novel published during her lifetime, The Italian, as The Italian Monk. Again, he took liberties with the tale, this time having the villain repent at the end and be reunited with his long-lost wife.

By 1808, theatres had staged Radcliffe's best known work, The Mysteries of Udolpho, three times, twice as operas. Miles Peter Andrews did his musical adaptation, The Mysteries of the Castle, in 1795, two years before Matthew G. Lewis has a hit with The Castle Spectre, which pays homage to and somewhat mocks Udolpho.

So long before I put Radcliffe on stage as a character, her novels had become theatrical sensations.
Posted by James Armstrong, Playwright at 8:39 PM