In his book Poetry and Politics in the Cockney School, Jeffrey Cox examines a group of writers, including John Keats, Percy and Mary Shelley, Leigh Hunt, and their circle. A group, Cox reminds us, is not a homogenous set of people, but rather a collection of individuals brought together by a core set of common values. 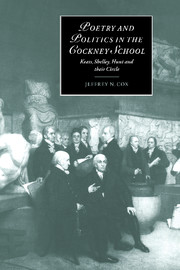 What is key here is that it is a set of common values, not one single point of doctrine upon which all can agree. The "Cockney School" Cox describes included both religious believers and self-proclaimed atheists. Some wanted gradual reform, while others wanted revolution. Some gravitated toward violence, while others were avowed pacifists.

Not only that, but groups do not have to be restricted to the labels of identity politics. The second-generation Romantics that Cox writes about included men and women, English and Scots, aristocrats and commoners. They disagreed with each other adamantly, but out of those disagreements came very constructive arguments and rivalries that left us a rich legacy of writing, including some amazing dramas.

Leigh Hunt, for instance, wrote the genre-challenging play The Descent of Liberty in 1814, and published it the next year. Those two years saw Napoleon defeated, exiled, returned, defeated again, and eventually banished permanently. Hunt responds to those monumental events with a play he described as "a mask" in which he appropriates the tradition of the 17th-century masque to comment upon the political events of the 19th century.

The Descent of Liberty would not appear to be written for performance, but Cox argues that the plays of Hunt and his circle were "not a rejection of the stage but an attempt to remake it." Cox sees these plays as an attempt to reform the canon. Since the Hunt group was engaged in a countercultural activity, they needed a countercultural form, so instead of writing neoclassical tragedy or popular melodrama, they turned to other genres. These could include masque, as in The Descent of Liberty, or pastoral, as when Hunt translated Torquato Tasso's Amyntas.

"In these plays, we can see how artists work to acquire cultural influence for a countercultural message by seeking beyond established and ideologically stabilized forms for a generic site within which one can negotiate between tradition and innovation," Cox writes. Neoclassical tragedy and the comedy of manners were the standard high genres for the Georgian stage, so if Hunt's group wanted to rebel against Georgian society, authors had to find new literary forms to do so.

The stage directions of these plays often sound wholly impractical, but Cox points out that many hits of the era relied on spectacular stage effects. A play like Percy Shelley's Prometheus Unbound might seem unproducible today, but its stage effects are not far removed from what Georgian audiences had come to expect. As Cox observes:

It is an intriguing paradox that the spectacular staging demanded by The Descent or by Prometheus Unbound strikes us as a sign of the untheatricality of these plays -- their status as poems more than dramas -- while in the context of the early-nineteenth-century stage such theatrical techniques in other plays were seen as signaling the victory of mere stagecraft over the poetic word.

Cox later turns to the mythological plays of Mary Shelley, Midas and Proserpine. Both of these plays celebrate the world of the pastoral, which Hunt had tried to revive in his translation of Amyntas. Both Hunt and the Shelleys were turning to older forms, but in an attempt to unlock something new. In the hands of these authors, forms like the masque and the pastoral create a utopian space in which the world can be re-imagined as a better place.

"I think we should see something heroic," Cox writes, "in this attempt to create... a pastoral stage upon which to act out the possibility of community, imagination, and love."
Posted by James Armstrong, Playwright at 5:41 PM