So the "Shaw in New York" conference ended yesterday, but I just received a message about the conference where I'll be presenting my NEXT paper!

From July 29 to July 31, the Society for Theatre Research will be presenting the conference "Theatre in the Regency Era: Plays, Performance, Practice 1795-1843" at Downing College, the University of Cambridge.

My paper is entitled "Succeeding the Siddons: Eliza O'Neill and the Triumph of the Romantic Style." It will explore the short but spectacular career of O'Neill, who was the subject of an earlier piece of mine that ran this year in Theatre Notebook. O'Neill embodied a number of early nineteenth-century aesthetic principles that came to be associated with Romanticism, and became the face of the artistic movement both for its practitioners and its detractors.

I've never been to Cambridge before, so I'm looking forward to it! 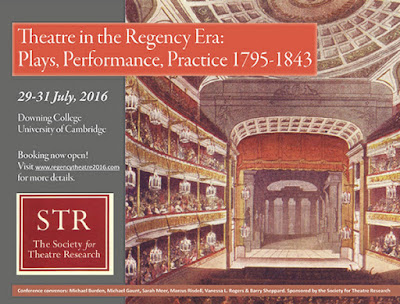