I was pleased to attend Danielle Cammarota's lecture yesterday at the Kips Bay branch of the New York Public Library. Speaking to the Friends of Dickens New York, Cammarota talked about garbage collectors, or "dustmen" as they are traditionally known in Britain, as well as their appearances on stage.

According to Cammarota, dustmen first became popularized onstage with with the play Life in London, W.T. Moncrieff's adaptation of Pierce Egan's popular novel about Tom and Jerry, two swells who get into trouble and have adventures together with the lower classes of society. The piece featured a dancing dustman named "Dusty Bob" who reappeared in a number of other plays as well.

Dusty Bob frequently caroused and danced with a black woman named African Sal. Together, they also had a mixed-race child named Mahogany Mary. You can see all three of them in this George Cruickshank illustration from the British Library: 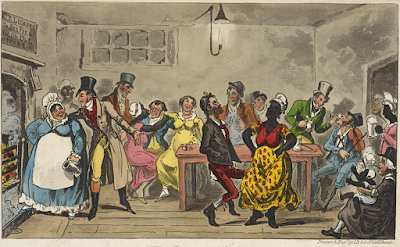 Dustmen were such popular characters onstage that it should come as no surprise that when Sadler's Wells adapted the Dickens novel Our Mutual Friend in 1865, the theatre titled the play The Golden Dustman.

Cammarota also brought in a copy of a poster advertising The Golden Dustman. Clearly, spectacle was important, as the poster announces (in much larger type than the name "Charles Dickens") "ENTIRELY NEW SCENERY by MR. JOHN JOHNSON". The poster goes on to list all of the locations displayed on stage:

ACT I:
Boffin's Bower in Holloway
A Street near the Temple, Fleet Street
Chambers of Mr. Eugene Wrayburn, Barrister-at-Law
A Church Yard near Temple Bar, by Moonlight
A Room in the House of Rumty Wilfer, near Battle Bridge

ACT III:
The Lock on the Thames at Sunset

The sets must have been a draw, given how much space is given to advertise them. (Far more space than is given to the actors.) Alas, I have been unable to find any images of what they looked like!