Peter Hacks set his 1971 play Omphale in a remote, mythic time, but the piece examined gender roles in ways that must have hit very close to home for the play's original audience. Hacks used the play to (among other things) critique the tradition-defying social experiments of the communist German Democratic Republic. However, even a staunchly socialist writer like Peter Hacks had to be careful.

After having his first successes in West Germany, Hacks voluntarily moved east in 1955. If he expected to be welcomed by the communist government with open arms, he must have been sorely disappointed. His mildly critical play Worries and Power premiered in 1960, but only after he was forced to make numerous revisions. Even with those changes, the communist party pressured the Deutsches Theater to shutter a revival of the play two years later.

For Omphale, Hacks reached back to the Herakles myth to explore issues in his own society. Adaptations of classics were frequent in the GDR, in part because they allowed East Germany to make the case that its writers were the true heirs to the German literary tradition. Classical adaptations also allowed writers to dodge the authorities. Hacks could write about recent developments in the GDR while pretending to write about someone else's society. In this case, he explored shifting gender roles.

Hacks was not the only East German playwright to respond to the Women's Movement, which swept across both sides of the Iron Curtain in the 1970s. Volker Braun probed men's anxieties over feminism in such works as his 1976 play Tinka. With Europe at peace and many traditional ideologies no longer holding sway, women were taking on men's roles. Similarly, men were exploring new identities other than the stereotypical masculine breadwinner. It is within this context that Hacks wrote Omphale.

In mythology, Zeus sent Herakles for a period of time to be slave to the Lydian Queen Omphale in punishment for an unjust murder, and while he was with her she amused herself by having the hero dress in women's clothing and do weaving and spinning. Though in the original myth Herakles feels degraded by this treatment, Hacks shows the Greek hero reveling in his ability to play the role of a woman.

Since two cross-dressers are always funnier than one, Hack follows the lead of numerous artists by having Omphale dress as Heracles and carry his famous club. This motif goes back to classical times, as can be seen in this Roman mosaic: 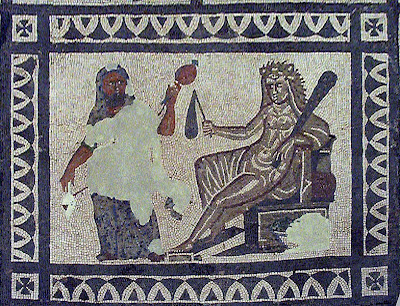 By choosing to remain enslaved to Omphale out of love for her, Hacks's Herakles does not fit the stereotype of the powerful man. This is not true slavery, however, as the hero claims he is bound to her only by his own choice. Herakles is so powerful he can renounce power and so manly he can renounce manhood.

Once Herakles completes his conversion to the feminine, the other characters are filled with disgust for him. The exact reason for his transformation is unclear. Herakles gives multiple justifications for his cross-dressing, each of them designed to play up his masculinity. He first explains that since he is doing the queen's duties he must borrow her sex as well as her rank. Next he says he imitates women because of his love for them. Finally, he says that to know a man's pleasure, he must feel a woman's.

All of these excuses allow Herakles to engage in role reversal without giving up any of his manliness. The problem is that no one else in the play is buying it. In their eyes, Herakles ends up less than a man, a typical fear of men resistant to feminism.

Hacks then reveals another great fear of anti-feminists--the masculinized woman. Omphale enters holding Herakles's club and dressed in his lion skin, and the scene that follows is a travesty of a lovers' quarrel, with Omphale taking on the role of a rational man while Herakles exhibits the over-emotional whims of a stereotypically irrational woman. Worst of all, Herakles does not even want to be touched by his lover. The role reversal has sapped the sexuality out of their relationship.

Fortunately, this condition does not last long. As the lovers attempt a tearful reconciliation, they receive news of the monster Lityerses. The prospect of battle seems to return Herakles to his natural manly state, and he goes off to face the monster. Her love threatened, Omphale likewise returns to being feminine. Though she goes in pursuit of Herakles, she does so for womanly motives.

If the play ended here, it could be regarded as a simple rejection of feminist principles. Instead, Hacks goes on to play with the gender identity of his two main characters in a way that is still comic but no longer derogatory. Herakles bravely rushes in like a man to fight Lityerses, but the hero is still dressed as Omphale. Just as brave is Omphale, who rushes in with womanly concern to protect her beloved, all the while still dressed like him. Both characters are enacting gender stereotypes, but they are now enacting positive stereotypes.

Lityerses has never met the pair, and besides that he seems to be a particularly unobservant monster, so he mistakes each one for the other. To a fool like him, it is simply a club that makes the man, and a skirt that makes the woman.

As Herakles proves his manhood by slaying Lityerses, Omphale goes into childbirth. The observers see these separate but equally important acts--bringing forth life and slaying the enemies of humanity--as both being the highest possible bliss. Having learned their lessons, Omphale takes off the lion skin, and Heracles removes his mask of Omphale. Now a mother, Omphale must accept her womanhood. In order to restore sacred and immutable gender roles, Herakles need only take up his club as a sign of man's eternal duty to preserve order through brute strength. However, that is not what he does.

In the final scene, Herakles plants his club into the earth, where it changes into an olive tree. He announces it is a symbol of humanity, which must grow forth from a savage past to a life of peace and fruitfulness reminiscent of a simpler time. In Brechtian fashion, Hacks demonstrates that the world is not eternally fixed, but can and must be changed. Whether those changes extend to gender roles is an open question, but Hacks does not rule out that possibility.

The ending is fundamentally utopian, looking forward to the progress that socialism promises. It remains ambivalent about the progressive goal of women's liberation, but solidly confirms a belief in progress. Like with Hacks's other plays, there is more to Omphale than immediately meets the eye.